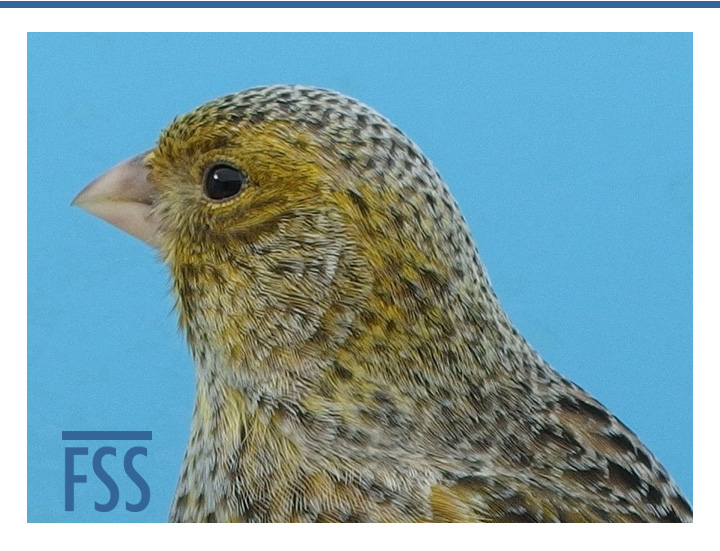 In History part 14 I discussed the slow, but inevitable, recognition of broken capped and non capped Lizard canaries. Caps are defined by the extent of clear feathers, but in this edition of Lizard canary basics I want to focus on the dark feathers, the ones that were once deemed to detract from perfection. Unlike the clear feathers they don’t have a collective noun (the cap), so I am going to invent one: the crown. By giving them a name, those dark feathers become a feature in their own right, and that is what I am going to illustrate here.

The LCA’s Description of the Ideal Lizard Canary is based on the clear cap gold cock, so you will look in vain for guidance on the crown. The closest you will find is a footnote to the Scale of Points:

‘In classes of non-capped or nearly non-capped Lizards, points to a maximum of TEN are awarded for perfection of spangling on the head’.

Note that it says nothing about broken caps. We are left to infer that spangling is also desirable in the crown of a broken cap, but in my experience it is one of those features of the Lizard canary that people rarely talk about, and which judges often ignore. I hope to make amends here.

From my own observations, the quality of spangling on the crown broadly follow the same order as rowings: silver hens tend to be the most distinct, gold cocks the least. Don’t take this as gospel: there are plenty of exceptions, and good rowings are no guarantee of good spangles on the crown. Lets look at a few examples.

Here are two silver cocks; you can see an improvement. The broken cap has distinct spangles, but we can’t see enough of the crown (from this angle) to assess the lineage.

The non cap gives us that opportunity: the individual spangles are not so distinct, but the lineage is very regular.

Now two gold hens. The first is a patch cap (1). The shape of the crown is very neat, but while the spangling is visible, it falls short of the best.

For a better example, have a look at this broken cap. The spangling is well-defined and runs in straight lines, mimicking the spangles on the back. The term ‘spangled crown’ seems very appropriate in her case.  It was ever thus: compare this photo with the engraving at the head of History, part 14 and you will see that things have changed very little over 140 years.

Finally two silver hens. First a broken cap. The contrast of dark and light is striking, although the regularity of the pattern does not compare with that of the broken cap gold hen. This contrast gives silver hens an advantage: their crowns may not be perfect, but they are still eye-catching.  Sometimes, just sometimes, you will find a bird with the best of both worlds: a total non cap with the contrast of silver feathering. Have a look at the photo at the head of this article.

The spangles on the crown are tiny and easy to overlook, yet they deserve to be admired for their delicate beauty. Watch out for them; they can be the crowning glory of the Lizard canary.

There are only two types of cap in which the dark feathers are given a recognisable name: the patch cap (an island of dark feathers in a pool of clear feathers) and the ticked cap (isolated dark feathers within a clear cap). They don’t benefit from a separate classification and are grouped with the broken caps and clear caps respectively.

This site uses Akismet to reduce spam. Learn how your comment data is processed.

You are welcome to comment on the articles and ask questions, but please observe these house rules:

1. You must use your real name - you know mine.
2. Your first comment will be moderated, so there is likely to be a delay before it is posted.
3. Traditional standards of civilised debate apply.
4. Please keep to the topic.
5. Respect the aims of this blog (see Introduction).

If everyone sticks to these rules there will be no need for any others.

Copyright on all content is reserved. If you would like to reproduce anything from this blog, in its entirety or in part, you must obtain my written permission first.